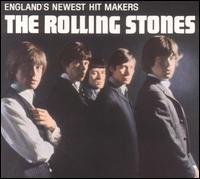 In the era of mega-concerts, massive stages, backup singers, extra musicians, clockwork efficiency, Pirates Of The Caribbean cameos, and knighthoods, it’s very easy to forget where and how the Rolling Stones started.

England’s Newest Hitmakers is the first Rolling Stones album and is typical of the time it was released (1964). The Jagger/Richards songwriting combination was still in utero at this point, so the album is a collection of cover songs, with one Jagger/Richards original (“Tell Me”) thrown in. (Two other songs, “Now I’ve Got A Witness” and “Little By Little” were credited to “Nanker Phelge” and Phil Spector—Phelge was a pseudonym for a song written by the entire group.)

What distinguishes this album from similar debut albums by bands like The Kinks is the utter conviction with which the Stones ply their trade. The Beatles may have been the best, most original band in England at the time, but the Stones were the most savage, honest practitioners of authentic American blues and R&B. There’s no confusing this album with Howlin’ Wolf or Muddy Waters, but it’s clear from the opening notes of “Not Fade Away” that the Stones were a band who understood the idiom in which they practiced. Mick Jagger never plowed a field or picked cotton, but he clearly had an empathy for the blues that was lacking in bands like The Yardbirds, who were copying their heroes without ever truly getting to the heart of the matter. As a result, the early Yardbirds (before Jeff Beck showed up and turned them into a great rock band) sound like young, white, English boys trying desperately to sound like old, American, black men, while the early Stones sound like…well, maybe not like authentic bluesmen but at least like guys who hung around with authentic bluesmen.

The blues authenticity comes from Brian Jones. At the time Jones was a polymathic musician, steeped in Elmore James and Muddy Waters and in these early days it was clearly Jones’s band. Jagger may have been the voice, but Jones was the heart and soul.

Nearly as important was Keith Richards who loved blues, but who was just as partial to the Chuck Berry school of blues as he was to the Muddy Waters school. The love of early rock ‘n’ roll shared by Richards and Jagger ensured that the Stones would be more than just a blues cover band. Indeed, their brilliant take on Buddy Holly’s “Not Fade Away” opens the album. By toughening up the Bo Diddley beat that Buddy Holly was nearly parodying, and by replacing Holly’s anemic picked guitar with percussive acoustic rhythms, the Stones took the rock song and turned it into a blues. Their version of Chuck Berry’s “Carol” is nearly the equal of the original and served notice that nobody would ever do Chuck Berry songs as well as the Stones would (indeed, one of my favorite moments from the Berry movie Hail! Hail! Rock ‘N’ Roll is when Keith Richards shows Chuck the correct way to play one of Berry’s own songs).

Early rock and roll was clearly blues-based, but the magic of the early Stones was that the rock tunes sat alongside the pure blues and emerged as a cohesive whole. Even the Motown song “Can I Get A Witness,” a pure pop song, emerges as a mutant Muddy Waters tune right down to the Otis Spann-ish piano that starts off the track. Willie Dixon or Bobby Troup, Chuck Berry or Holland/Dozier/Holland…all the songs ended up sounding distinctly like the Stones. Some of the covers (e.g., “Not Fade Away” and Rufus Thomas’s “Walking The Dog”) surpass the original versions. Whether they were a blues band playing rock songs or a rock band playing blues song, the result was seamless. Surprisingly, the most “pop” moment on the album is the sole original song, but even “Tell Me” sounds like some sort of country blues song.

The album’s empathy for the blues is what allows it to hold up forty-five years (!) later when so many similar albums have been forgotten. The only criticisms of this album are the useless filler instrumental “Now I’ve Got A Witness” and the one handicap that the Stones would soon rectify: a dearth of original material. Had they continued covering blues and R&B songs, the Stones today would be a forgotten band, albeit a good one. That this fact was recognized by their manager, Andrew Loog Oldham, and they were pressured into writing original compositions is what saved the Stones. For this brief moment the Rolling Stones were the finest practitioners of genuine blues in England, even if they weren’t the most original.