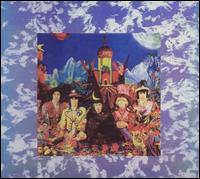 Fresh from the back-to-back triumphs of Aftermath and Between The Buttons, the Rolling Stones returned to the studio in tumultuous times. Brian Jones was clearly on the path to self-destruction due to his enormous intake of drugs, Mick Jagger and Keith Richards had been busted for drugs and were facing serious prison time, and the music scene was changing rapidly.

In June of 1967 the Beatles rewrote the musical rules with the era-changing and era-defining Sgt. Pepper’s Lonely Hearts Club Band. It wasn’t the first psychedelic album, and in many ways it was only minimally psychedelic, but Pepper was the first pop music album to be treated as “art.” The rest of the music world, convinced they all had a “Sgt. Pepper” in them, broke out the horn and string sections, tracked down Mellotrons, and gave it their best shot.

The Stones, too, got caught up in the psychedelic craze and, in November of 1967, released what many fans had been anxiously awaiting: the Stones’s response to the Beatles. Portrayed in the press as the “anti-Beatles,” the Stones delivered an album that was the flip side of Pepper. Where Pepper was majestic and sunny, informed by English music hall, Indian ragas, and LSD, the Stones’s Their Satanic Majesties Request was dark, drug-fuelled, and sinister even as it attempted to co-opt the language of the flower children.

The album begins with discordant piano chords, horn blasts, and what sound like a drunken choir singing about the glories of tripping on LSD. “Open our heads/Let the pictures come,” they sing on “Sing This All Together.” It’s an insanely catchy chorus but the music is out of this world: African percussion, squawking guitars, bleating horns, harmonies that fade in and out seemingly randomly. There’s a short musical interlude in the middle that sounds like wasted musicians playing instruments they’ve never played before. It’s all very strange, and all oddly compelling. At a little less than four minutes, it’s a bizarre introduction to the album, far from the punchy tunefulness that is the title track to Pepper. Still, so far, so weird. We’re not off to a great start, but at least it’s interesting.

The album continues with “Citadel” which sounds like an evil outtake from Between The Buttons. Keith’s guitar raunch starts the song, and Charlie Watts has a grand time slamming out the beat, but Jagger intones vaguely psychedelic lyrics over a musical background that once again consists of everything, including the kitchen sink. As with “Sing This All Together,” much of the music pops up at random: a blast of guitar, a horn, Mellotron. It’s a tough little rocker underneath all that, an indicator that maybe the Stones hadn’t completely forgotten where they came from.

At least until “In Another Land.”

Bill Wyman’s début songwriting and lead vocal performance with the Stones isn’t a bad song at all, but the vocals on the verses are phased almost beyond recognition. When the chorus comes along, driven by a propulsive Charlie Watts, and Wyman’s vocal is saved by Jagger, the song becomes instantly better than 95% of what was then current psychedelic music, but during Wyman’s effects-laden verses, the song borders on little more than being a time piece. And did I mention that it ends with about twenty seconds of snoring?

Fortunately for the listener, “2000 Man” brings the Stones back to being the Stones. It’s still far more processed than anything on Between The Buttons, but the song itself could have fit on that album. Guitars, bass, drums, and Jagger are once again the order of the day. There are psychedelic elements to the song, but they are not nearly as obtrusive as they are on the songs leading up to it. If anything, there’s a country-ish lilt to the music, enough so to think that if it had been slimmed down even more it might have fit on 1968’s Beggar’s Banquet. “2000 Man” isn’t a landmark in the canon of Stones songs, but it ranks evenly with “Citadel” as the best song on side one of this album.

That’s mainly because side one ends with a reprise of “Sing This All Together” called, cleverly, “Sing This All Together (See What Happens).” It’s nearly nine minutes of the most godawful aimless noodling ever committed to record. Odd spoken bits (“Where’s that joint?”), tuneless instrumentation, a tweeting flute that sounds borrowed from a Traffic record, chimes…you name it, it’s on here in one discordant mess of a recording (it can’t really be classified as a song at all). It sounds like (and may be) an incredibly loose jam by a bunch of stoned musicians, and it is the first truly awful thing the Stones had released on record.

Why anyone would even want to flip the record to side two is a mystery, but if they got that far they were rewarded. The second side of the record begins with the transcendent “She’s A Rainbow,” one of the very best Stones songs from their brief psychedelic period. Watts once again steals the show while Jagger sings a beautiful lyric over a background of piano, strings, acoustic guitar, drums, bass, and Mellotron. “The Lantern” follows and it seems like the Stones may be able to salvage something out of this mess. Once again, the psychedelic elements are pushed to the back and Jagger sings over a backdrop of acoustic and electric guitar. Like “2000 Man,” “The Lantern” is not one of the best Stones songs, but it’s one of the best on this album.

“Gomper” follows, and with a title like that you know it has to be good, right? Well, it’s as good as its title. Tabla players (Jones, maybe?) make this a companion piece to George Harrison’s “Within You Without You,” but “Gomper” actually manages to pull off the neat trick of taking itself more seriously than the Harrison tune. At least George had the good sense to end his philosophical ramblings with a burst of laughter. “Gomper” also reflects Brian Jones’s infatuation with the Master Musicians of Joujouka, a group of Moroccan musicians. “Gomper” is a little too self-serious, but by combining African and Indian music, it’s also a prime example of world music (you see? Peter Gabriel didn’t invent world music…not even close). Of course, “Gomper” (I just like writing that word) also suffers from being about two minutes too long.

Majesties is nearly saved by the masterful, dark science fiction of “2000 Light Years From Home.” Brian Jones excels on the Mellotron on this song, creating one of the finest uses of that instrument in all of rock and roll, while Watts lays down a reliably steady beat. Synthesizers and distorted guitars provide coloring while Jagger sings about the loneliness of space…or perhaps the loneliness of being out on a bad trip. It all works beautifully on this song, from the snaky bass line to the swirling keyboards to Jagger’s distant vocal. Yes, it’s psychedelic but it’s great psychedelic. While most of this album has aged very poorly, this song has not. It still sounds as fresh and disconcerting as it ever did.

Much as he did on Between the Buttons’ closer “Something Happened To Me Yesterday,” Jagger assumes the role of the MC on the last track, “On With The Show.” Unlike “Something Happened,” there’s no real song with “On With The Show.” It comes off like a shameless ripoff of the concept of Sgt. Pepper, but poorly executed. Party sounds, Jagger’s carnival barker vocals drenched with effects as he tells those assembled that “we’ve got all the answers/and we’ve got lovely dancers, too/There’s nothing else you have to do/On with the show/Good health to you.” Not as stunningly bad as the side one closer, but this is no way to end an album.

Written and recorded during a dark period in Stones history, Their Satanic Majesties Request finds the Stones grasping for an identity, following
some sort of alternative path of the Beatles. Listened to today, it’s an interesting curio and there are a few keepers on the album. In fact, if you got rid of “Sing This All Together (See What Happens)” and replaced it with the contemporaneous, extraordinary single “We Love You/Dandelion” the album would be improved enormously. Clip “On With The Show” and insert “Child Of The Moon” (the psychedelic-tinged B-side of their next single), and suddenly the album’s pretty good.

As it stands, Majesties is a failed experiment.