Ginger Baker burst onto the music scene with Cream in 1966, the only drummer on the circuit who could go toe-to-toe with Jack Bruce and Eric Clapton. He was a jazz drummer, heavily influenced by the great Phil Seamen, whose technical expertise was unmatched, but his ego and bad temper led to a nearly constant conflict with Jack Bruce. They admired each other greatly as musicians, and hated each other with a passion as people. Cream was simply not built to last.

Neither was Blind Faith, the band formed by Eric Clapton and Steve Winwood. Baker showed up at Winwood’s house and told them that he was joining the band. Clapton and Winwood were glad to have such an incredible drummer, and too scared of Baker to say they didn’t really want him.

Being the drummer in a band was never enough for Baker. His ego wouldn’t let him take a back seat to anyone. He formed Ginger Baker’s Air Force, a largely ad hoc ensemble, and released two albums. Air Force was an interesting band, a pioneer in what is now called “World Music”. But how many extended drum solos can you put on an album before you realize that commercial success isn’t going to be there? Their very little-known second album was more interesting than the first, double live, album, and included a version of Cream’s “Sweet Wine” that featured Baker at his frenetic best.

After that, Baker drifted. He moved to Africa and opened a recording studio (Paul McCartney’s Band on the Run was recorded there). He played with several different outfits over the decades, from the Baker-Gurvitz Army to Masters of Reality. He even hooked up with Jack Bruce again in a trio called BBM, with Gary Moore stepping in for Clapton. He did session work, even joining former Sex Pistol John Lydon (nee Rotten) on PiL’s Album (yes, that’s the name).

He moved from Africa, to Italy, to America. His studio in Africa failed. He lost almost all of his money through bad management and worse investments.

I had the great fortune to see Baker playing with Jack Bruce and Eric Clapton in one of the Cream reunion shows at Madison Square Garden in 2005. Baker was in poor health at the time, but you would never know it. His playing was extraordinary, from the rolling toms of “We’re Going Wrong” to an extended drum solo in his showcase, “Toad”. It should be noted that I hate drum solos, and have always hated “Toad” (Cream), “Do What You Like” (Blind Faith), and “Toady” (Air Force). Seeing him live, that all went away. Midway through the solo, my friend who also hated drum solos turned to me and said, “That’s a different drummer”. And it was. The Ginger Baker of 2006 was incorporating African rhythms, world music, jazz, rock, blues, and everything else he could think of into his playing. It was a far cry from the technically amazing, but monotonous, solos he’d done as a young man. Amazingly enough, Ginger Baker in 2006 was actually better than Ginger Baker in 1966, when he was considered the best drummer in the world. 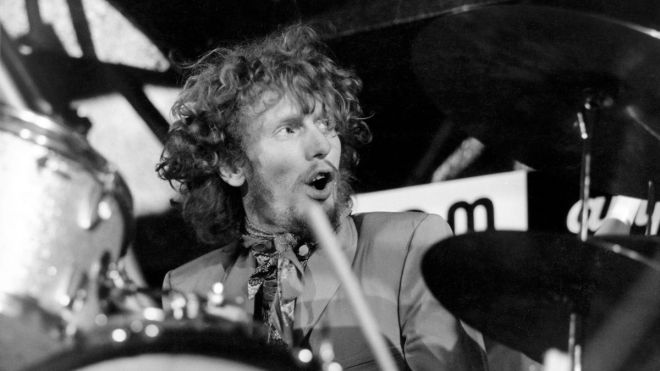 Unfortunately for himself, his bandmates, his family, his friends, and anyone who got in his way, Ginger Baker was an absolutely monstrous human being. Angry, violent, short-tempered, arrogant, abusive to everyone around him. It was why he could never stay in a band for long, and why bands he created splintered just as quickly as those he joined. Every musician wanted Ginger Baker on drums; nobody wanted Ginger Baker in the band. Even in his dotage, it didn’t change. A documentary called Beware of Mr. Baker begins with an elderly Baker insulting almost every musician he ever played with, culminating in Baker hitting the director in the face, breaking his nose,  with his cane because the director mentioned, casually, that as part of the project he would also be interviewing Baker’s musical associates and family. The documentary gets darker from there, and is a fascinating viewing experience. The only people who escaped Baker’s vitriol were Phil Seamen, Charlie Watts, and Eric Clapton, whom Baker called his best friend. The reaction shot of a genuinely shocked Clapton saying, “He said that?” before damning Baker with very faint praise is worth the price of admission alone.

But at the end of the day, the documentary is both harrowing and heartbreaking. He abandoned his family, only to reconcile many years later, and then abandoned them again, but not until he told his son, a gifted musician in his own right, in his parting words, “You’re a lousy drummer.” It’s hard to imagine living with as much hate in your heart as Ginger Baker.

Ginger Baker was one of the greatest drummers who ever lived. His playing at times was almost supernaturally good. Neil Peart, the Rush drummer largely looked at as a God by drummers everywhere, once said “His [Baker’s] playing was revolutionary, extrovert, primal, and inventive. He set the bar for what rock drumming could be. Every rock drummer since has been influenced in some way by Ginger—even if they don’t know it.” Drummers from John Bonham to Stewart Copeland to Alex Van Halen to Chad Smith have sung Baker’s praises, even if Baker would never return the favor (“Bonham couldn’t swing a sack of shit”).

He is gone now, and I sincerely hope he found peace and redemption in his final years, when he was ill and out of the spotlight. If not, Rock and Roll Hell just got its drummer. RIP.