I first heard Chuck Berry when I was a child, unfortunately. The song came out of the radio constantly, hitting number one on the charts. But even as a child, I thought it was inane and stupid, a joke so bad and crude that it was below even those of us in second grade.

Astoundingly, “My Ding-A-Ling” was Chuck Berry’s only number one hit. Fortunately, it has now taken its rightful place as a freak novelty number better left in the dustbin of history.

My next exposure to Berry came via the soundtrack album to American Graffiti, the two record set (41 songs!) that sparked a great love of early rock ‘n’ roll for many people my age. “Almost Grown” and “Johnny B. Goode” immediately and forever banished the idea that the guy who sang that dopey dick joke song was a one-hit wonder.

It was several years before I found a good compilation in a used record store. Released in 1967, Chuck Berry’s Golden Decade was the first comprehensive collection of Berry’s classic songs and the gold standard of Berry’s greatest hits until The Great Twenty-Eight was released in the early 1980s. It was missing several songs now acknowledged as classics (no “Carol”, no “Little Queenie” or “Sweet Little Rock ‘N’ Roller”, among others), but included some lesser known songs like the bluesy “Deep Feeling” and the boisterous “Too Pooped To Pop”.

Two things were immediately apparent on listening to Golden Decade. The first was that Chuck Berry was an extraordinary guitar player. The second that he was an equally amazing lyricist.

More than Little Richard, Jerry Lee Lewis, Buddy Holly, the Everlys, Roy Orbison, Carl Perkins, and even Elvis Presley, Chuck Berry was the definitive 1950s rock ‘n’ roller. He was the first “guitar hero”, and singlehandedly made the guitar the primary instrument of this new music. His showmanship, culled from guitarists like T-Bone Walker and Guitar Slim, set the standard for rock ‘n’ roll that is still in use today. His voice was smooth and clear, making even his made up vocabulary (“motorvatin'”, “botheration”, etc) easily understood. Chuck Berry was the defining sound of rock ‘n’ roll music, and every rock guitarist since then must pass through the School of Chuck. 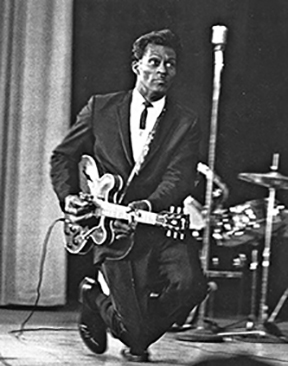 The personification of rock ‘n’ roll

But as much as his music, what also set Berry apart were the lyrics. Already in his late-20s and early-30s when he had his greatest success, Berry was the poet laureate of the decade he helped define. Most of the early rock ‘n’ roll songs concentrated more on a good beat to get people on the dance floor; the words were strictly a secondary concern. But Berry’s lyrics were perfect encapsulations of the lives of his young audience. At a time when the subject matter of pop and rock songs was love and, well, more love, Berry was writing about life (including, of course, love). And importantly, he was writing about life in the 1950s. In the song “Me and the Devil”, Robert Johnson brought blues out of the cotton fields and into the 1930s by adding details like getting on “a Greyhound bus”. Berry did the same for rock ‘n’ roll, by writing about the culture of the 1950s: Oldsmobiles and Cadillacs on the highways, jet-propelled airplanes, televisions, drive-in movies, jukeboxes playing the really hot records, malt shops, high school, teenagers dancing on American Bandstand…all of it taking place in an America where hamburgers sizzle on an open grill night and day.

Compare the nonsense lyrics of so many early rock ‘n’ roll songs with any of Berry’s. The simple, practically cretinous, rhymes of “Be-Bop A-Lula”, the novelty nonsense lyrics of “Jailhouse Rock” or the sanitized versions of “Hound Dog” and “Tutti Frutti”, the raw lust of “Great Balls of Fire”…all of these are great songs. None of them can hold a candle to the lyricism here:

Runnin’ to and fro, hard workin’ at the mill
Never failed in the mail, yet come a rotten bill…

Salesman talking to me tryin’ to run me up a creek
Says you can buy it, go on try it, you can pay me next week…

Blonde haired, good lookin’ tryin’ to get me hooked
Wants me to marry, get a home, settle down, write a book…

Same thing every day, gettin’ up, goin’ to school
No need to be complainin’, my objections overruled…

Pay phone, somethin’ wrong, dime gone, will mail
I ought to sue the operator for tellin’ me a tale…

I been to Yokohama, been a fightin’ in the war
Army bunk, Army chow, Army clothes, Army car…

Workin’ in the fillin’ station, too many tasks
Wipe the windows, check the tires, check the oil, dollar gas

Each of these lines is punctuated with some exasperated version of “Ahhh” and the refrain of “too much monkey business for me to be involved in”. It’s a lyric that could be written today, with only a few details changed, describing life in a hectic world. The song is rooted firmly in the 1950s, however, not too far past World War II, where you spoke to operators via pay phones, and were helped by gas station attendants who wiped your windows, checked your tires, and pumped a dollar’s worth of gas into your car at a time when that could get you a few gallons. Berry is describing life at the time in a way that has more meaning to more people than the combined writings of Jack Kerouac or Allen Ginsberg.

Berry’s music defined guitar rock for all time. His songs have been covered by everyone from the Beach Boys and Beatles to Green Day and The Killers. Berry’s lyrics notified the Dylans and Lennons of the world that you didn’t have to be tied down to moon/June/croon rhymes. His showmanship set the precedent for the Hendrixs and Townshends that came later. (You can even see Townshend imitating Berry’s famous “duck walk” a few times in the movie The Kids Are Alright, and Hendrix tearing through a jaw-droppingly ferocious “Johnny B. Goode” in Jimi Plays Berkeley.) The Rolling Stones, more than any other band, worshiped at the shrine of Chuck Berry; his “Come On” was their first single and they covered “Carol”, “Little Queenie”, “Confessin’ The Blues”, and “Down the Road Apiece” among others. The band’s most famous lyric, “I can’t get no satisfaction”, was a direct rip of Berry’s “I don’t get no satisfaction from the judge” in “Thirty Days”.

Elvis Presley is the King of Rock ‘N’ Roll. His style was utterly unique, not least because he was a white kid who sang like a black man. But Chuck Berry was the man who truly defined both the music and the decade. Elvis spawned hundreds of impersonators after he died; during his lifetime, Berry had tens of thousands of disciples who ran his music through the prism of their own experiences and lives, and took his timeless riffs and stagecraft from the shores of California and the Liverpool docks to the Hollywood Bowl and Wembley Stadium.

There is no rock ‘n’ roll without him.