After the confusion and grappling for identity shown by Their Satanic Majesties Request, it was crucial for the Rolling Stones to find themselves. They had gone through being a blues band, an R&B band, a soul band, a pop band, and a psychedelic band, all with varying degrees of success. But with Beggars Banquet, the Stones found their real identity: they would take all the blues and country elements that they loved and synthesize them into a brand of bluesy rock and roll the likes of which hadn’t really been heard before.

The transformation started with a single, but what a single it was. “Jumping Jack Flash” tweaked the riff of “(I Can’t Get No) Satisfaction” and added a myth-making blues rock lyric (“I was born in a crossfire hurricane/And I howled at my ma in the driving rain” is easily as good as anything Muddy Waters came up with) to define the sound of the Rolling Stones once and for all. Now, over 40 years later, it remains the definitive Stones song, if not the best.

The B-side was a holdover from the Majesties sessions, but far superior to almost everything on that album. “Child Of The Moon” was tinged with holdover psychedelia, but played tougher than anything except “2000 Light Years From Home.”

As good as the single was, it was just a foretaste of the album that followed. Beggars Banquet is an anomaly among Stones albums. It is a mostly acoustic album, with only snatches of snarling electric guitar. Brian Jones, who played so well on the previous albums, was a drug casualty at this point. He managed to rouse himself enough to contribute the masterful slide guitar on “No Expectations,” but is largely absent from the rest of the album. In practical terms, this meant that the experimentation Jones loved and the diverse instrumentation he had brought to the albums starting with Aftermath, was gone. The new sound was stripped down, lean, and ferocious. 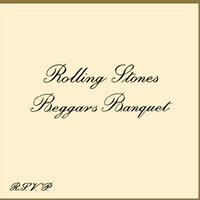 Before its release, the album was already marked with controversy. The cover desired by the Stones featured a graffiti-covered toilet stall. The record company refused to release this cover, substituting a simple white cover with an elegant script, as if it was an invitation. Normally, I tend to side with the artist, but the record company-approved cover is beautiful and proper, while the Stones’ choice for the cover was simply tacky. Unfortunately, with the release of CDs, the Stones’ original cover replaced the “invitation” cover. Too bad.

If “Jumping Jack Flash” was myth-making from Mick Jagger, the myth became set in stone with the opening track, “Sympathy For The Devil.” Played as a samba, with heavy use of light percussion (congas, tablas, maracas), Jagger assumes the persona of Satan himself, casting himself as a major player in the long parade of history, from the Russian Revolution through the World Wars and up to the assassination of John and Robert Kennedy, all while the demonic chorus chants “woo hoo” behind him as if part of an invocation. Keith throws in a harsh, discordant guitar solo that seems pasted together from disjointed licks while Jagger scats and screams like a tribal shaman. Forty years has blunted the impact of the song, but I can still remember where I was when I first heard it and the mind-blowing impact it had on me.

And yet, “Sympathy For The Devil” is completely atypical of the songs on Beggars. The stunningly gorgeous “No Expectations” follows the voodoo ritual of "Devil." The slide guitar is one of the only things added to the album by Brian Jones, but it is among the finest examples of slide guitar in the long history of rock music. Over a soft acoustic backing, Jones’s slide cries real tears and adds a depth of feeling to Jagger’s brilliant lyrics of a love gone wrong. Bill Wyman comes close to stealing the show with his understated bass, on prominent display in the perfect mix, and session man extraordinaire Nicky Hopkins contributes a stately piano solo. “No Expectations” is possibly the finest ballad in the Stones discography, and one of the finest ballads in rock’s history. It is a new kind of acoustic blues, rooted in the past but sounding completely contemporary.

From the new blues to the new country, “Dear Doctor” provides some much-needed laughs after the sinister “Sympathy” and the heartbreaking “Expectations.” Over a surprisingly good, pure country and western backing track, Jagger camps up the story of a young man being forced into a wedding with a “bow-legged sow.” It’s nearly an irresistable sing along, as Keith proves by chiming in on prominent backing vocals at seemingly random intervals. The music is excellent, but the song itself is still somewhat of a parody of country music, as if the Stones were uncomfortable expressing their love for such an “unhip” style of music (in British rock circles, at least), so they compensated by performing the song in a jokey fashion. Whatever the level of seriousness, the song works perfectly as both parody and country song, and the lyrics are clever and funny without ever turning into the punch line of a joke.

The Stones returned again to the acoustic blues with “Parachute Woman,” a more straightforward 12-bar blues than “No Expectations.” Jagger plays a haunting harmonica at the fade out. The song is, if anything, the “weak spot” on Beggars, if one exists. As weak spots go it’s terrific, a loping acoustic blues with unusual, sexually charged lyrics (“Parachute woman/Land on me tonight”).

Side one concludes with “Jigsaw Puzzle,” which is nearly as long as the epic “Sympathy For The Devil.” Once again acoustic guitars provide the main riff, with overdubbed slide (this time by Keith). The blues here is once again the “new” blues the Stones were crafting. The song avoids becoming a standard blues song on the strength of the lyric, a lengthy dissertation in the style of Bob Dylan’s character studies. Over Bill Wyman’s prominent bass, Charlie’s rock steady backbeat, Nicky Hopkins’ piano chords, and Keith’s acoustic riffing and stinging slide runs, Jagger sings about the outcasts of the world, from the tramp on the doorstep to the bishop’s daughter to the “family man” who is also a ruthless gangster. Jagger observes these characters from a disinterested, jaded perspective, waiting patiently for some revelation that will help it all make sense. The persona of the Stones is set in this song, as Jagger turns his lyrical attention to the band itself, defining them just as much as the film A Hard Day’s Night defined the Beatles for their fans. “Oh the singer he looks angry/At being thrown to the lions,” sings Jagger, likely remembering his recent drug bust and subsequent prosecution. “And the bass player he looks nervous/About the girls outside/And the drummer he’s so shattered/ Trying to keep on time/And the guitar players look damaged/They been outcasts all their lives.” The Stones encapsulated in a single verse: notorious ladies’ man Wyman, solid backbeat machine Watts, and wasted guitarists. It is the lyrics and Jagger’s performance of them that makes this song so extraordinary, with much credit going to Wyman’s rumbling bass and Richards’s stinging leads.

Side two begins with the furious acoustic strumming of “Street Fighting Man,” inspired by a peace march in London that turned violent. The song is so loud and propulsive it’s difficult to believe that it’s not a full-on electric guitar assault, but the primary riff is played by acoustic guitars that are pushed way into the red. With Watts playing an elemental drum pattern, really little more than just holding the beat steady, and Wyman once again stepping up and playing extraordinary bass guitar, Jagger sings one of the defining rock lyrics of 1968. In a dreadful year of war, violence, riots, assassinations, Jagger’s “Summer’s here and the time is right/For fighting in the street, boys” was a call to arms while the following lyric was a more jaded “What can a poor boy do/But sing in a rock and roll band?” Jones even contributes a few odd sitar drones, but they’re largely buried under that rocket-fuelled rhythm.

For the first time since December’s Children, the Stones included a cover song as the followup to “Street Fighting Man.” Unlike their earlier cover choices of Chuck Berry, fifties rock and roll and blues, and contemporary soul, the Stones dug back to the 1920s country blues for the Reverend Robert Wilkins’s musical retelling of the Bible story, “Prodigal Son.” The Stones play it straight, with Keith playing beautiful acoustic guitar and Jagger singing in a slurred voice that suits the music perfectly. It’s among the best Stones cover songs ever, sounding like a loose jam in the basement.

Considering that one of the obsessions of the Rolling Stones from even their earliest days was sex, Beggars Banquet is largely a sex-free zone. There’s the fun wordplay of “Parachute Woman,” and then the absolutely salacious raunch of “Stray Cat Blues.” Jagger sounds more sinister on this song, being himself, than he does playing the Devil on “Sympathy.” “I can see that you’re just 15 years old/But I don’t want your I.D.” sings Jagger, promising his nubile young friend that there will be “a feast upstairs.” Even as the girl promises to be a wild cat, right down to scratching and biting, Jagger one-ups the ante: “You say you got a friend/That she’s wilder than you/Why don’t you bring her upstairs?/If she’s so wild, she can join in, too.” Keith plays wild electric guitar leads over Watts’s rolling drums before the song ends with an extended jam.

After the sexual fury of “Stray Cat Blues,” the acoustic blues of “Factory Girl,” with its Dave Mason-played Mellotron simulating a wildly strummed mandolin, and fiddle played by Family and future Blind Faith bassist Ric Grech, comes almost as a relief. The sister song of “Parachute Woman,” there is a down-home country feel to the song, but an almost Celtic underpinning. The congas (played by Rocky Dijon) and tabla (played by Charlie Watts) add a distinctly un-country sound to the background, but it all works beautifully. Jagger’s lyric of waiting for his blue-collar lover to get home is the icing on the cake.

Which brings the listener to the conclusion. A soft acoustic guitar introduces Keith Richards on lead vocal for the first verse before Jagger takes over. “Salt Of The Earth” is a classic workingman’s drinking song on first listen, but really is about how powerless the “common people” really are. Jagger’s refrain “When I search a faceless crowd/A swirling mass of grey and black and white/They don’t look real to me/In fact, they look so strange” seems to dilute the rousing verses until you listen more closely. While the verses seem to salute the “salt of the earth” with a series of toasts, prayers, and thoughts, the reality is quite different.

The answer lies in the verse “Spare a thought for the stay-at-home voter/His empty eyes gaze at strange beauty shows/And a parade of the gray-suited grafters/A choice of cancer or polio.” Jagger will raise a glass to the hard-working people and drink a toast to the uncounted heads, but his real statement here is that the people no longer have power over their own lives, and that politics has failed (“they need leaders but get gamblers instead”). As the album closer, “Salt of the Earth” is breathtaking in its construction. The acoustic blues are there, but so is a gospel chorus, and a rave up finale that suggests that maybe there’s life in the people yet.

Beggars Banquet, released the same day at the Beatles’ White Album, was the peak of 1960s Rolling Stones. It marked the beginning of a five-year stretch where the Stones could seemingly do no wrong in the recording studio. It remains one of the best Stones albums ever, if not the best. It remains one of the greatest albums in the history of rock music.

One thought on “The Rolling Stones: Beggars Banquet”