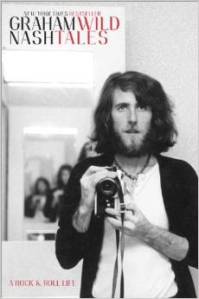 Honestly, Graham Nash has always kind of annoyed me. He seemed to be the weakest member of Crosby, Stills, Nash & Young, though most of their hits were written by him. Even more than David Crosby, Nash was the “hippie” in the band. He could sing beautifully and his harmony vocals were never short of amazing, but there was just something that seemed very lightweight about him. Maybe it was hearing the execrable “Marrakesh Express” one too many times when I was growing up that made me anti-Nash. Or maybe it was just that he was the quietest, most laid back member of a group notorious for their egos and volatility.

At the same time, I absolutely love The Hollies, the band Nash formed in England in the early 1960s. Yes, they were strictly second-string in the British Invasion, and their filler-to-fabulous ratio is a bit high, but The Hollies’ Greatest Hits is one of the most flawless pop albums ever released. It shines in its perfection. So when a friend of mine lent me Nash’s autobiography I decided to read it to learn more about The Hollies as much as for any other reason. Surprisingly, I’m less anti-Nash now.

He’s still annoying. The political tangents he goes off on throughout the book are unbelievably strident and reveal a man who doesn’t so much think about these issues than absorb and parrot whatever his fellow travelers and friends tell him. Nash also has an ego the size of Jupiter and he’s not shy about his talent. The book is full of bragging about his vocal abilities and songwriting. On the first of these, his bragging is justifiable. Nash does have a great singing voice and is as good a harmony singer as anyone in the business. On the latter, his songwriting, his boasts are a bit much. Nash has written some really good songs and a few great ones. He’s also written a lot of junk. Despite his claims to the contrary, only Neil Young went on to do considerably greater work after CSNY released Deja Vu in 1970.

Nash is a musical figure so locked into the 1970s it’s hard to picture him beginning in much the same way the Beatles or Stones did. Nash met Allan Clarke in grade school and they discovered that they could sing together. In forming the Hollies, they combined their talents with a love of the Everly Brothers. Nash’s stories here are charming, especially the one about how he and Clarke staked out the hotel where the Everlys were staying in England and actually got to meet them and talk to them. Nash’s love of music is readily apparent, and he makes it very clear that what he always loved most was harmony. In the early days of the Hollies Nash and Clarke perfected two-part harmonies but when guitarist Tony Hicks joined the band, and proved he could sing equally well, they branched out past the Everly Brothers and started working on three-part harmonies, which created a very different dynamic and sound. In this sense, the Hollies were the perfect training ground for Nash.

When Nash met David Crosby, another singer deeply versed in harmony singing from his time in The Byrds, and Stephen Stills, a multi-talented musician, songwriter, and singer, he was able to instantly blend his voice with theirs. Their vocal tones were so perfectly complementary that they sounded like nobody else. It was harmony singing, but a style and level of ability unheard in rock music.

Shortly after they recorded the Crosby, Stills & Nash album, Ahmet Ertegun floated the idea that Neil Young join the band. Nash protested vehemently, afraid that Young’s voice would not blend and worried that Young’s reputation as a somewhat mercurial character would upset the balance. It was only after Nash met Young that he agreed. But in some ways, Nash was right. Neil Young was far too beholden to his own instincts to be a good member of any band. While Young brought a harder edge and some truly great songs to the band, he was far too difficult to work with.

It sounds like a really big deal, but the truth is that in 1969 Neil Young was far from being famous. He’d left Buffalo Springfield and was floating around doing session work and his first, unsuccessful, solo album. Today, Crosby, Stills, Nash & Young is considered a “supergroup” but then Crosby, Stills, and Young were journeymen. Arguably the biggest star in the band was Graham Nash, and his star shone brightest in England.

For a band that did very little work together in the 1970s (they released only two studio albums and one live album), they remained hugely popular. Their 1974 tour was the first stadium tour in rock music. They toured and recorded in various permutations. Stills recorded an album with Young, Crosby and Nash worked together and apart. This was how Nash originally envisioned the band: CSNY would be a home base that they could all return to while being free to make music in any other outlet they wished. But through it all, none of the side projects carried the same weight as when three or four would collaborate. The 1977 album CSN was meant to be the followup to Deja Vu, but ended up the sequel to 1969’s Crosby, Stills & Nash after Young dropped out of the sessions. Neil Young didn’t record with the band again until 1988’s American Dream (and the less said about that godawful mess the better). At this point, the band is thought of as CSN and sometimes Y.

Throughout the book Nash is almost exactly how you imagine him to be. He’s still very much enamored of the hippie mentality and still pays a lot of lip service to that long ago ethos. The political lectures scattered throughout the book are annoying, even if you admire Nash’s exuberance and beliefs. Graham Nash is a musician who was at the beginnings of the English rock scene (The Hollies played Liverpool’s Cavern Club more than any band except the Beatles). He played at Woodstock and was at Ground Zero for what became the California sound of the 1970s. More Woodstock, fewer lectures about nuclear power, please. (His lectures might have been more palatable if he didn’t sound like all of his information came from a Greenpeace pamphlet.)

The book is somewhat misnamed. A better title might have been Mild Tales. The truly wild tales of decadence and licentiousness were the ones starring Crosby. Long Time Gone, the autobiography of David Crosby, is a far better book, both for his musical reminiscences and for the genuinely terrifying portrait of drug addiction Crosby paints. In fact, the wildest tales in Nash’s books are the ones about Crosby’s descent into an unparalleled Hell of addiction. Graham Nash had a taste for women and drugs, but never seemed to really lose control. He was remarkably self-possessed and self-assured as a young man breaking into the music business and remained so for his entire career. This, and his basic charm, make him likable (although it also fuels his unlikable ego). His love of music and photography, and his restless creative spirit are also abundant. The book makes a nice companion piece to Long Time Gone, and I’d be curious to see a good autobiography of Stephen Stills, another character blessed with musical genius and titanic ego. (Neil Young is too eccentric to write a decent autobiography, but Shakey by Jimmy McDonough is a fascinating biography.) Separate and combined, their lives are one of the most interesting rock stories ever written, spanning almost every music scene from England’s 1950s to Greenwich Village in the early 1960s to Los Angeles in the late sixties and throughout the seventies. For now, only Crosby and Nash are speaking up.