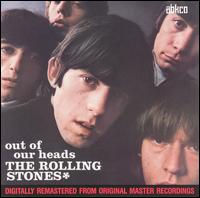 Not to be confused with Ron Nasty’s first book, Out Of Me Head, the fourth Rolling Stones album finds them mining the same fertile grounds they had on the previous records, with a few exceptions that are nothing short of magnificent.

Once again, as on 12 X 5, the accent here is less on pure blues and more on soul music. Don Covay’s “Mercy Mercy” and Marvin Gaye’s classic Motown hit “Hitch Hike” start off the album in a familiar style. As usual, the Stones are still one of the very best cover bands that ever played. Jagger may not be a particularly great soul singer in comparison to the originators, but he still manages to be pretty convincing, especially on “That’s How Strong My Love Is.” You won’t forget Otis Redding’s version after hearing Jagger’s, but for a pasty white English boy, Jagger more than delivers.

The other covers are consistently excellent, including an outstanding version of Sam Cooke’s “Good To Me.” The Stones bring their blues roots to the soul mix with the Solomon Burke hit “Cry To Me.”

The covers are not as smartly chosen as the ones on The Rolling Stones, Now! but they are played with the same raw style. Brian Jones and Keith Richards continue to be the best two-guitar attack in rock music.

The thing that separates Out Of Our Heads from the earlier albums are the original songs. On prior albums, the Stones were clearly finding their way as songwriters. Even as recently as Now! there were only four original songs. At some point the Jagger/Richards combo started clicking. There are seven original songs on Out Of Our Heads, including a raw, funny blues dedicated to the unsung heroes of the music business, “The Under Assistant West Coast Promotions Man.” Of the remaining originals, “One More Try” is a quick shuffle and not all that indistinguishable from a mediocre Yardbirds track, minus the searing Clapton leads, and “I’m All Right” is really nothing more than a groove, and not a terribly interesting groove at that.

Where Jagger and Richards really start to get close to the target is with the two near classics: “The Spider and The Fly” is an original song that sounds as if it is a cover of a blues standard. Finally the Stones have come genuinely close to the heart of blues music in an original song. The lyric is both funny and clever and is one of the earliest examples of Jagger’s notorious satyriasis. Poor Mick, lured to the bed of an older woman (almost 30!).

“Play With Fire” is even closer to the mark. Not really a blues, it is more of an attempt at an original, slow-burning soul song. The excellent lyric serves as a warning to a rich, spoiled, high-society woman who is used to getting whatever (and whoever) she wants. Most unusual is the quiet harpsichord throughout the song, an early example of the kind of instrumental stretching that Brian Jones was starting to explore. The choice of harpsichord is perfect, adding a stately, almost Victorian, air to a song directed at a member of the British upper crust.

With “The Last Time” and “(I Can’t Get No) Satisfaction” the Stones not only hit the target, they obliterated it. These two songs are so much higher in their quality than the surrounding songs that they stand out as sore thumbs. The only parallel I can think of is the inclusion of the devastating “You Really Got Me” on the first Kinks album (a completely unremarkable collection of mediocre Merseybeat songs).

“The Last Time” begins with one of the most recognizable Stones guitar licks of all time. Then the band comes in firing on all cylinders. The Jones/Richards guitar interplay in the solo is breathtaking, as are the backing vocals that chime in at the end as Jagger starts shouting and scatting in a style that he would later perfect in “Sympathy For The Devil.” Probably most unusual is the fact that the chorus on “The Last Time” veers strongly towards country music. There’s nearly a twang to Jagger’s delivery, and shows that even at this early stage exposure to American radio was shaping the music of the Stones as they assimilated the many sounds around them.

“Satisfaction” needs no introduction really. It may be one of the most overheard songs of the last 44 years. It’s been played at every Stones concert and is one of the pillars of classic rock radio. The fuzz guitar riff that starts the song like a rocket engine is probably the single most easily-identified riff in the history of popular music. There’s probably nobody over the age of 14 who can’t name that tune in five notes, and nobody over the age of 30 who can’t name it in two. Richards wrote probably the single greatest riff in rock and roll history, with all due respect to “Smoke On The Water,” “Sunshine Of Your Love” and a couple of dozen Led Zeppelin songs.

Most importantly, the music connects perfectly to the lyrics. The chorus of the song reflects Satyr Mick’s longing for satisfaction, but the verses imply that the satisfaction being sought is more than purely sexual (though that plays a big part). The whole of the lyric implies a search for meaning in everything that was going on around the Stones. Radio DJs with their mindless blather leave Mick longing for something deeper (probably wishing Murray the K would shut up and play some music), television advertisements similarly leave him confused and wanting more (with the brilliant lyrical swipe at advertising “Some man comes on to tell me/How white my shirts can be/But he can’t be a man/’Cause he doesn’t smoke/The same cigarettes as me”). The whirlwind of touring in both England and the States is leaving our singer disoriented and clamoring for something more. Even in the final verse, when the Stones are touring and appearing on promotional jaunts (“doing this and signing that”), the solace of a woman is out of reach. Rumors of the day implied that the woman in the song rejected our young Lothario because it was that time of the month for her (“Better come back/Maybe next week/’Cause you see I’m on a losing streak”). If I ever get the chance to ask Mick I will, because that reading of the lyric makes perfect sense.

Far from being the easily caricatured song of sexual frustration that many people assume, “Satisfaction” is actually a brilliant lyric set to an apocalyptic riff. It is hard to imagine that Jagger and Richards would write better songs, and it is only overexposure that knocks “Satisfaction” down a few pegs from where it rightly belongs, near the pinnacle of rock songwriting craft and, importantly, rock recording. The world of rock music is filled with one-hit wonders, but any band capable of writing “Satisfaction” was clearly going to be around for the long haul. It’s too bad the rest of the album falls short of “Satisfaction” and “The Last Time,” but it’s also understandable.