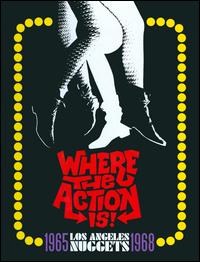 This is the fifth release in the Nuggets series from Rhino Records, and the second to focus on a small geographic area (the first was San Francisco). Where The Action Is focuses on the sound of Los Angeles, but the box set also represents the sound of barrel scraping. It’s not all bad, by any means. Much of it is really excellent but for the first time in a Nuggets box (and I have yet to listen closely to the San Francisco box), there is also a distressingly large amount of mediocrity and way too much material that can only be classified as junk.

The box starts well with the Standells rave up “Riot On Sunset Strip,” strong tracks from The Byrds, Love, The Leaves and, especially, Buffalo Springfield and Captain Beefheart. Excellent songs from the West Coast Pop Art Experimental Band (“If You Want This Love Of Mine”) and an extraordinary version of “Take A Giant Step” by the Rising Sons are also highlights, while the Association turns in a solid performance of Dylan’s “One Too Many Mornings.” These songs, and others, make the first disc of Where The Action Is a pretty stellar compilation. The sound is Nuggets-y garage rock, the performances inspired, and the songwriting generally good.

Disc One also demonstrates one of the problems with the box. The inclusion of Buffalo Springfield’s “Go And Say Goodbye,” Love’s “You I’ll Be Following,” and The Doors’ “Take It As It Comes” serve to make much of what else appears sound second-rate. The biggest problem is that, beginning with Disc Two, much of what appears is second-rate.

Frank Zappa once said that the “freaks” of Los Angeles were much weirder and wilder than the more famous “freaks” of San Francisco. That may be true, since Los Angeles was home to people like Zappa, Beefheart, Jim Morrison, Arthur Lee, etc. But Los Angeles is also a city that is built on dreams of stardom. When the Mamas and Papas sang of “California Dreamin'” they were headed to Los Angeles, not the hippie mecca of Frisco. Because Los Angeles is so focused on stardom, the industry there is more likely to be geared towards artificiality, and much of Where The Action Is sounds like it was cooked up in a board room by movie moguls looking to get into the music business.

Here come the phonies: Sonny and Cher, The Humane Society, The Others, The Velvet Illusions, Limey And The Yanks, etc. Way too much of this box sounds like the theme songs to ridiculous 1960s teen exploitation movies. Close your eyes during the annoying “Hippie Elevator Operator” and you can see the go-go dancers as the movie credits splash onto on the screen. Jan and Dean’s “Fan Tan” sounds like a TV commercial for chewing gum…simply awful. The Garden Club’s “Little Girl Lost And Found” is a shameless Monkees rip off. That’s right…a Monkees rip off. Worst of all is Dino, Desi, and Billy’s “The Rebel Kind,” an ode to rebellion that is so lifeless and pale it makes “You Light Up My Life” sound like “My Generation.”

There’s enough good and great material on here for a solid 2-CD set, but spread over four discs the flaws really stand out, and it doesn’t help to have included great material from the truly great bands. Near the end of Disc Four, wedged between the near parody of psychedelia “The Truth Is Not Real” (Sagittarius) and Barry McGuire’s “Inner-Manipulations,” is “You Set The Scene.” This song, the closing number from Love’s epic Forever Changes album, is so much better than anything else in a four-disc radius that it mercilessly crushes the competition. The effect is not unlike listening to a sampling of Merseybeat numbers from Billy J. Kramer and Gerry and the Pacemakers, and dropping the Beatles’ “A Day In The Life” in the middle. It’s simply not fair. Like Bambi vs. Godzilla unfair.

And that’s the striking thing about the box. By including numbers from bands like Love, the Doors, Beefheart, Buffalo Springfield, the Byrds, and the Beach Boys, the flaws of the other bands become so much more evident. Those great bands were real bands and had both sound and an artistic vision. They may have been looking for stardom, but they were first, and foremost, creative people. Too much of the rest of the box is people who have the sound, but no vision. It says a lot when the Monkees come across as one of the more “real” bands, because while they may have been made-for-TV they didn’t sound like they were made for TV. Indeed, the Monkees are represented here by the early Moog Synthesizer experiment piece “Daily Nightly,” an extraordinary Mike Nesmith original song. Too much material on this box, especially on Discs Two and Three, sounds like what movie and TV producers believed the kids of the day would enjoy. Where The Action Is sounds like Los Angeles: 40% real talent, 60% plastic.